Primitive to Revolutionary: The Story of Commercial Ovens

The story of commercial ovens, from cooking over a fire to contemporary commercial food production equpiment. 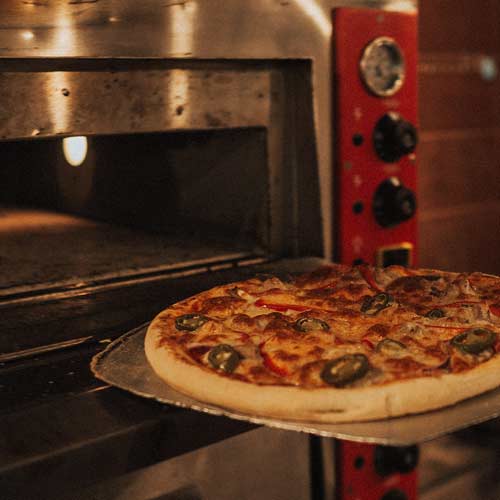 In the modern era of commercial food preparation, we are incredibly fortunate to have a vast range of equipment to help us prepare, cook and serve thousands of dishes – from baking and roasting to frying and grilling, and everything in between, commercial kitchens are stocked with the right tools for the job.

But of course, it wasn’t always so – things have advanced at a rapid rate, particularly over the course of the last 70 years or so, making our lives easier, our kitchens more efficient and our end product better than it’s ever been before.

So where did it all begin? Well, that’s a question for the ages…literally! We know from artefacts and imagery that some of the first people to roam the earth used fire to cook food, and that later on they built simple stone walls to contain the heat and hold the implement upon which the food was placed to cook.

The Greeks took it one step further and enclosed the heat into the first ovens, which they used to bake bread and other goods.

The late Middle Ages, around the 1400-1500s, sees the first taller brick and mortar hearths with chimneys which could accommodate metal cauldrons, with the first written historical record of an actual oven being built recorded in 1490 in Alsace, France. This oven was made entirely of brick and tile.

As things progressed, inventors began to solve the age-old issue of smoke – fire chambers, which contained the fire and wood, and had holes on top onto which flat pots could be placed to heat up, set the new standard. By 1735 the Castrol stove (stew stove) had been invented by Frenchman François Cuvilliés – his invention had several openings on top covered by iron plates, so that multiple dishes could be cooked simultaneously.

Around the same time, the manufacture of cast iron ovens began to ramp up – in Germany the Five-plate or Jamb stoves emerged, and by 1800 the Rumford stove, the first large-sized oven designed for large-scale catering, was invented by Count Rumford.

The Rumford Stove – the prototype commercial oven – had one fire source to heat all its pot plates, each of which could be individually regulated. It was truly pioneering, but too large for the average home kitchen, for which more compact designs such as the Oberlin stove, patented in 1834, was a forerunner.

Away from Wood, and onto Coal, Kerosene and Gas

By the mid-1800s wood had been replaced by coal and kerosene, both of which heated faster and more effectively. In the case of kerosene, the ovens were sootless, although kerosene was harder to come by than coal, and more expensive as a result.

Leading the charge on gas ovens was British inventor James Sharp, who patented a gas oven in 1826 which would, over the course of the next 70 years, be a blueprint for the modern gas oven. It took some time to gain widespread appeal as the gas lines took decades to run into cities and homes, but by the 1920s most homes had gas cookers and ovens.

A notable brand that emerged at the time, and one that is still very much a household name in Britain and Europe, is the AGA cooker, invented by Swede Gustaf Dalén, a Nobel Laureate.

By the 1930s electric ovens began to take hold, after William Hadaway had issued the first patent for an electric oven, and although even today there is a mix of gas and electric in most homes, the electric oven truly made its mark most effectively in the commercial kitchen space.

It was the invention of the resistor heating coil that allowed electrical ovens to progress at a rapid rate, and the evolution has culminated in the commercial cooking apparatus we have today.

Stainless steel, double-wall ovens, microwave ovens, grill conveyers, convection ovens, flash roasters and browning machines are just some of the options on offer to kitchen managers, making their lives easier, and our food delivery faster, our food quality better and our overall experience a vastly improved one from the humble origins all those centuries ago.